Cost: £ – can be done on a budget
Rating: 7/10 – it’s a fun place but I’m not desperate to go back
Trip length: 2 nights gives you enough time to explore

Flights are reasonable if you book far enough in advance – ours were £175 with no hold luggage (out with EasyJet & back with Ryanair).

Accommodation
We stayed in an Airbnb which was tiny but super cheap (5 of us paying about £15 a night each) – £30 for 2 nights. Of course you can stay in a swanky hotel if you have the cash but make sure you stay in the centre of the action 🙂

Currency
Euro – check the conversion rate before you go! 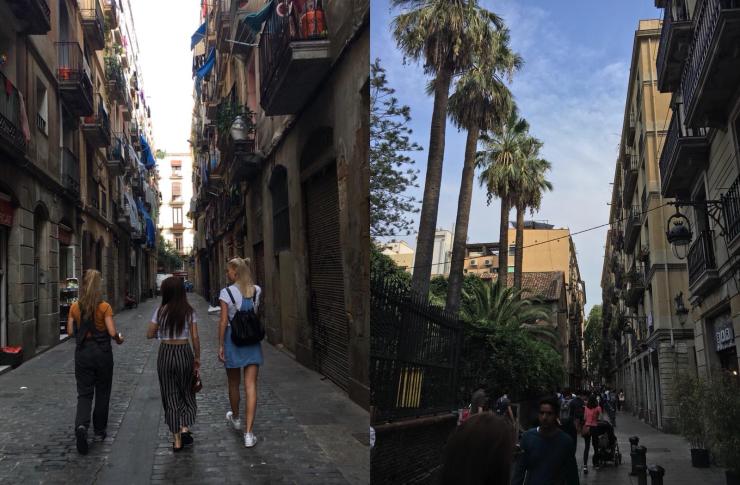 They have Uber in Barcelona so make sure it’s downloaded on your phone for cheap, reliable transport. I don’t think we used it when we were there and were ripped off by metered taxis. They have metro / bus / trams which are easy to use but it’s all very walkable if you’re staying central.

1 – Sagrada Família
The most iconic landmark in Barcelona. It was designed by Gaudi (construction started in 1882) but it’s still not finished – cranes will spoil your view as the back is still being worked on (looks like a Disneyland version of the gothic front). It’s set to be completed in 2026 (the anniversary of Gaudi’s death). 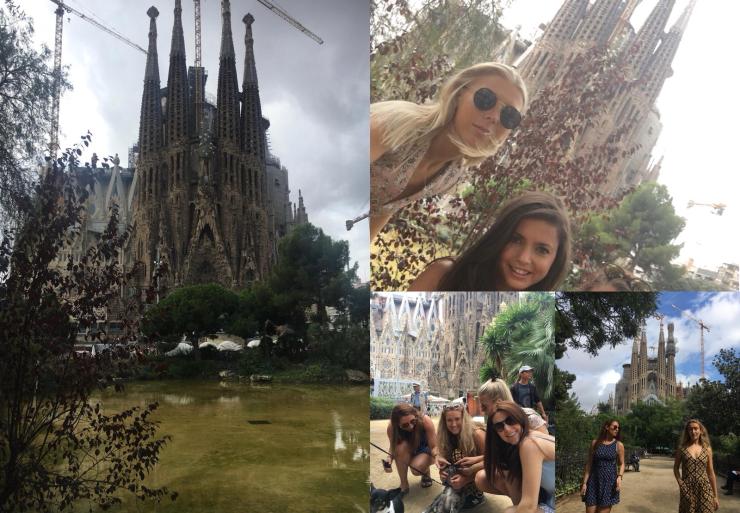 You can go inside for EUR 15 (£13.50) and up to the top for panoramic views for an extra EUR 10 but be prepared to wait in line – I’ve been to Barcelona twice but never inside the Sagrada Família because of the seemingly never ending queues!!

2 – Le Boqueria Mercat
Barcelona’s most famous market, it’s a feast for the eyes as well as the tastebuds. If you have accommodation with a kitchen then I’d buy your ingredients here. If not, enjoy a fruit pot / cheese / cold meats / seafood from the stalls!

3 – Las Ramblas
You’ll definitely find yourself walking down Las Ramblas as it’s a central point of Barcelona – it literally cuts through the city centre. There are live performances, human statues, shops and many restaurants. It’s nice to have a drink in one of the restaurants but the food is overpriced and not the best – bit of a tourist trap!

4 – Palau Nacional on the Montjuïc mountain
Montjuïc is a hill in Barcelona…you could probably walk but we took the metro to the Espanya stop and strolled the rest of the way.

On the top of the hill is the MNAC or Museu Nacional d’Art de Catalunya. We didn’t go in but it has great views of Barcelona from the steps! It is also home of the Font Magica de Montjuic and whilst it didn’t look particularly impressive during the daytime, I just looked online and there appear to be amazing fountain light shows during the evening.

Sandy beach in Barcelona! It wasn’t quite hot enough for us to sunbathe but I’m not sure I would’ve wanted to even if it was & I certainly wouldn’t have wanted to swim in the sea (feels a little dirty right by a polluted city!)

You can see the famous W Hotel in the distance which is a popular venue with Instagrammers wanting to go get some snaps of cocktails with a view. If you’ve got the cash to spend it’s EUR 349 (£310) per night to stay there!

6 – Parc de la Ciutadella
A gorgeous park to stroll through. When we were there the ‘La Merce‘ festival which is Barcelona’s biggest festival on the year. The park is full food stalls, wine tasting and entertainment! Even without the festival it’s a lovely place to watch the world go by! You can also hire a boat if the weather is nice.

Barcelona in general is lovely to walk around, especially in the sun.

Food 🙂
We ate a lot of lovely food. You can’t leave without having a seafood paella!

Sensi Bistro in the gothic quarter was amazing (pics below) and claims to serve the best tapas in Barcelona. Share lots of small plates and you won’t be disappointed. It wasn’t too expensive either 🙂

There’s plenty of choice so with a little research you’re sure to have a fantastic dining experience in Barcelona!

I can’t remember the exact spend but it would’ve been no more than £200 per person. We ate and drank all we wanted but didn’t have any big drinking nights / visits to the W Hotel / other swanky cocktail bars. As with all the places I blog about you can of course spend more / if you’re on a tighter budget you could eat and drink more economically.