Cost: £ – very cheap when you’re out there but flights can be expensive
Rating: 10/10 – you have to go
Tip length: 2-3 nights would be perfect

I only had 36 hours in Siem Reap. It was a flying visit and although I wish I had stayed a little longer, I was absolutely wowed by what I saw!

CLICK HERE to see a video I made of the trip.

Currency
The local currency is Cambodian Riel. Whilst it might be useful to have some, we didn’t use any! Most places accept and charge in USD (some places actually only accept USD).

Transport
You can jump in a tuk-tuk or get a taxi – both options are incredibly cheap. Check the cost with your driver ahead of getting a ride to avoid being overcharged. You can barter, but often you’re arguing over about 20p!

We stayed in a 5* hotel called Borei Angkor Resort & Spa on Siem Reap’s main hotel strip. Despite the room only costing £65 per night (including a fantastic breakfast), a bottle of water by the pool was USD 8. It was actually cheaper to drink beer at USD 3!!

The room was nice and the pool area was gorgeous. A swim was much needed after a day exploring in 33 degree, 85% humidity!

Flights
I would recommend visiting Siem Reap as part of a bigger trip. The return flights from Bangkok in Thailand only took 45 minutes and cost less than £100. There are no direct flights from London, but you can book return flights with a stop or 2 from the UK for as little as £500. Always check SkyScanner for best fares.

A tuk-tuk temple tour!
There are many different tour options you can book (bike / tuk-tuk / minibus / taxi), but I would definitely suggest you choose a tour with a guide. We booked a sunrise tuk-tuk tour online with a guide for about £85 per person. Our amazing guide called ‘You’ said you can book directly with him for a fraction of the price (the umbrella company take most of the cash you pay)! WhatsApp him on: +855 78 700 209 for more info.

We had a 5am pick up from our hotel and were taken by tuk-tuk to get our ticket and ID card before heading to Angkor Wat for sunrise (which we had an amazing morning for)! Make sure you watch from behind one of the ponds as the reflection in the water really makes it spectacular. It wasn’t too crowded when I visited, but there are 2 ponds so check which one is busiest if you’re struggling to get a good shot.

Angkor Wat was the biggest temple built by the Khmer and is one of the largest religious monuments in the world. It was originally built as a Hindu temple by King Suryavarman II, but towards the end of the 12th century it had transformed into a Buddhist temple (which it continues to be until the present day)! The name Angkor Wat means ‘Temple City’ / ‘City of Temples’ in Khmer: Angkor = city / capital city … Wat = temple

It was designed to represent Mount Meru which is the home of the ‘devas’ (divine) in Hindu mythology. It has a moat more than 3 miles long, and an outer wall at 2.2miles long. The moat stopped it being completely engulfed in jungle during like some of the other temples in Angkor.

One of the first westerners to see Angkor Wat was a Portuguese monk called Antonio da Madalena in 1586 who said it was “like no other building in the world”. There are also inscriptions suggesting Japanese Buddhist pilgrims were there celebrating the Khmer new year in the 17th century.

Despite it’s magnificence, (and although it was inhabited by some), Angkor Wat was slowly forgotten by Khmer locals until the French explorer Henri Mouhot saw and wrote about it in the 19th century. France invaded in 1863 to take control of the ruins and independence from France was only reclaimed in 1953.
In the 20th century significant work began restoring the temple and removing vegetation, but this work was paused during the civil war. During this time many refugees took shelter in Angkor Wat from the fighting, (see pics below!)

Unfortunately after the wars (our guide said 500 years of fighting) the temples were significantly damaged by looters stealing whatever they could, namely gold & heads from statues of Buddha! (Literally every Buddha head has been chopped off!) 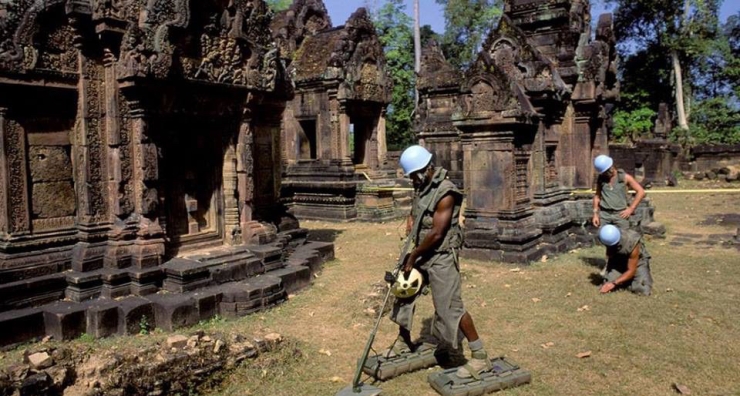 See a picture of the more advanced looting above, and 2 pictures of Buddhas with no heads below.

After you see the sunrise and explore Angkor Wat, our guide took us to one of the restaurants walking distance from the temple for breakfast. We brought our packed breakfasts from the hotel, but the menu was extensive and cheap.

Bayon (the main attraction in Angkor Thom) was my favourite temple and located a very short tuk-tuk ride away from Angkor Wat. Angkor Thom was built in the late 12th century by King Jayavarman VII and was established as the capital of his empire. His Royal Palace was also built nearby but was made of perishable materials (like all housing around the temples) and so does not remain.

Angkor Thom is famous for its face towers which were incredible!! Originally there were 54 towers in Bayon, each with 4 giant faces! They look like slightly smiling Buddhas, although I’ve read online that it’s debated whether the faces are Buddha, or the King, or Bodhisattva Lokeshvara, or a combination of all 3.

The windows are a hot spot for some classic tourist shots. See above centre my dad nailing the ‘look into the distance’ shot, and my attempts at squeezing one of the faces below.

It also has face towers at the city gates (see below). Apparently the South Gate is the most well preserved and is definitely worth a visit.

I also saw elephant riding which was very hard to watch after spending a week volunteering at the Elephant Nature Park in Chiang Mai (Thailand) and seeing how badly this sort of work damages an elephant both physically and emotionally.
PLEASE NEVER, EVER RIDE AN ELEPHANT.

The truth behind every working elephant is the ‘crush’. When they’re young, they’re taken away from their mum and are tied up so they cannot move. They’re starved and beaten severely with metal hooks/nails for an intense and long period of time. The aim is to break their beautiful spirit to ensure they fear and obey their trainer/mahout.
The abuse is so bad that their trunks have to be tied up as they often try to commit suicide by standing on them. I’ll link here to my Elephant Nature Park blog when I write it, and watch the trailer for Love & Bananas which is a fantastic film you can download on iTunes.

Another temple built for King Jayavarman VII to honour his father. He also probably lived in it whilst Angkor Thom was being built. In the above left photo, you’ll see pillars with the front sections removed. This is because it was originally Hindu and all Hindu images were removed when the religion changed.

Although well preserved, the temple is largely unrestored and has many trees growing through and on the walls! It’s incredibly impressive and worth checking out.

4 – Ta Keo
Ta Keo has a very interesting story. It was built by Jayavarman V and you’ll notice external decorations are absent. Our guide told us that this was because the temple was struck by lightening which was seen as bad luck. Therefore, work stopped on the temple (which is hard to believe considering how much work had already been done).

5 – Ta Nei
Another temple built during the reign of King Jayavarman VII. We missed the gibbons, but apparently many usually hang around here.

Our guide described this as ‘jungle temple’ and online it’s largely referred to as ‘tomb-raider temple’ as it’s where many tomb raider scenes were filmed. Again, it was founded by King Jayavarman VII (he was busy!) It’s largely in the same condition it was found in, with vegetation and trees growing everywhere…it’s absolutely incredible!

As you can see, the temples are spectacular. The photos don’t even do them justice!
*TOP TIP* – there are lots of very young children selling different souvenirs for USD 1 which is a hell of a lot of money for them. Get a bunch of dollar bills and buy your gifts from these children rather than from the hotels / markets.

The Khmer Rouge Killing Fields
Our guide touched briefly on the history of the Cambodian genocide, and I really wish we’d had another day in Siem Reap to visit the Killing Fields and learn more.
The Killing Fields are a number of sites where more than a million people were killed by the Khmer Rouge regime led by Pol Pot from 1975-79. There are some 200,000 mass grave sites where just under 1.4 million victims lie. The total death figure during the regime is reported at around 2.2million, but our guide believed that this number is far, far higher (more than double even).
After the civil war, the Khmer Rouge regime wanted to create an agrarian society. People would be forced to work the land in terrible conditions and be given ‘warnings’ for minor offences, If they had 2 warnings they’d be sent for ‘re-education’ which basically meant death.
To save ammunition, killings were carried out by poison, spades / sharpened bamboo sticks. Sometimes children would be killed by having their heads smashed against trees, and often victims were forced to dig their own graves. All the time, the Cambodian government were able to have a seat at the UN pretending everything was hunky dory!
Our guide was 7 during this time!
To visit one of the sites, you can go to Phnom Penh and get a guided tour.

There is a night market every evening at the heart of Siem Reap which is great to have a walk around.

There is also a fun street called ‘Pub Street’ with a ton of bars and restaurants on it! Not the best food I’ve ever eaten, but great for a cheap beer and a good atmosphere.

As mentioned, I only had a very limited time in Siem Reap. I am sure there is a lot more to do if you have longer than 36 hours.

Cambodia was a country I was totally unaware of and so I am very glad I visited. It’s obvious there is no democracy – there’s only one party who have been in power for 40 years and nobody likes / votes for them. Recent laws forbid the Cambodian people from speaking out against their leaders so there is no freedom of speech. The people also have very little money with the average salary at around USD 150 per month. Make sure you tip plenty. To you, $3 is the cost of your standard morning coffee; to them, it might contribute significantly to whether they’re able to send their children to school or not.